Thank you for visiting our little dev blog about Narrow One.  It's always nice to see you return.

We proudly present to you, the china update! This means looooots of new stuff (and that is also why it took so long).

Let's talk about the map first, it's a big one

We had the idea to have a battle take place on a wall for a long time. A map where you walk on the wall, jump off and walk parallel to the wall and cross to the other side through a broken gate or other broken parts. And what theme would fit this idea better than ancient china. This is how we got to our version of the Great Wall. Did you notice that this map is mirrored instead of rotated? We wanted to do this to keep the idea of the inner and outer wall possible, otherwise it would be flipped mid way.  One side of the wall, the outer side is where the enemy attacked from, climbing up with ladders, breaking the gate and digging underneath the wall. The fight went on and behind the wall. Now you arrive and your task is to reclaim this part of the wall.

This map features a few different weather scenarios such as sunny, sunset, night and a rainy foggy day.

Also, if you listen carefully you can hear some new insect noises, random insect emoji 🐛

The center tower of the map is the entrance gate of the wall. The guard tower has 3 different floors. Hide behind the war drums on the top floor and enjoy the rhythm of people shooting at you.

In this map we try to get a good balance between spread out open battlefield perfect for sniping and hectic close quarter fights, especially fun for the new bow....

The weapon selection is finally balanced, with 3 bows and 3 crossbows we restored balance to the universe. (Shout out to 𝕾𝖎𝖗 𝕯𝖚𝖒𝖇 for the suggestion)  The repeating crossbow holds 10 bolts, which can be fired rapidly. While shooting the player has reduced walking speed. Try not to walk to keep the aim tight. The repeating bow, is useful for raining down arrows from a safe distance, thats why we called the class, the support class. We also redesigned all the previously made bow skins to also fit the new crossbow. In order to add the repeating crossbow we had to rewrite all the code for the weapons. The game grew a lot, with the addition of classes and unique bows making the code somewhat messy. Rewriting the code for the bow took some time but it will save some time once we will get to adding melee and other fun stuff.

This update also has some new gear for you to collect, lucky you. 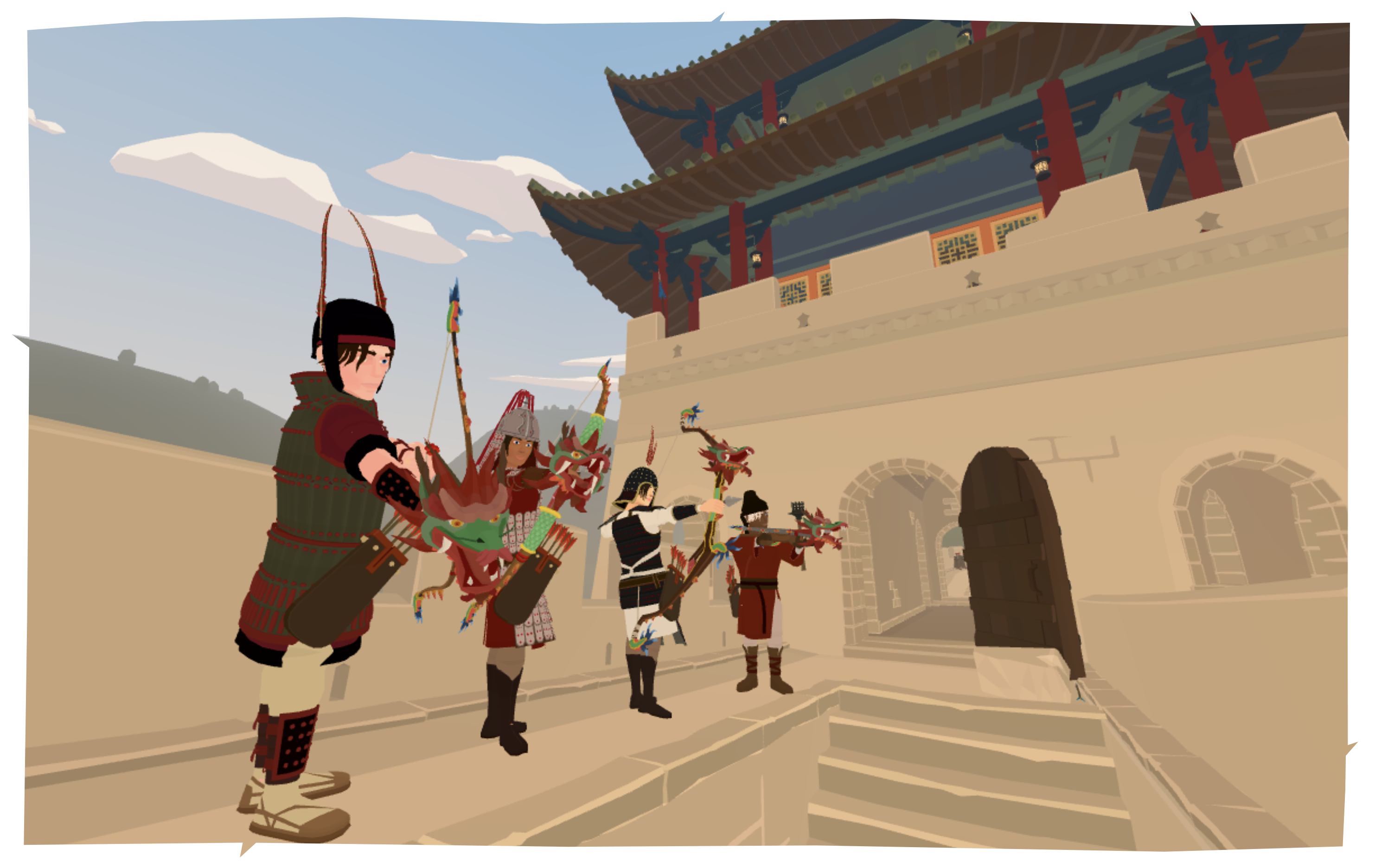 4 clothing sets. The sets are looooooosely based on gear from different Chinese dynasties. Besides that we added some extra hats.

And! My personal favourite, the dragon bow skin set. Every bow has a few different version of the dragon type bow skin, some with a scary dragon head and some just the back scales of the dragon. Hopefully something for everyone. 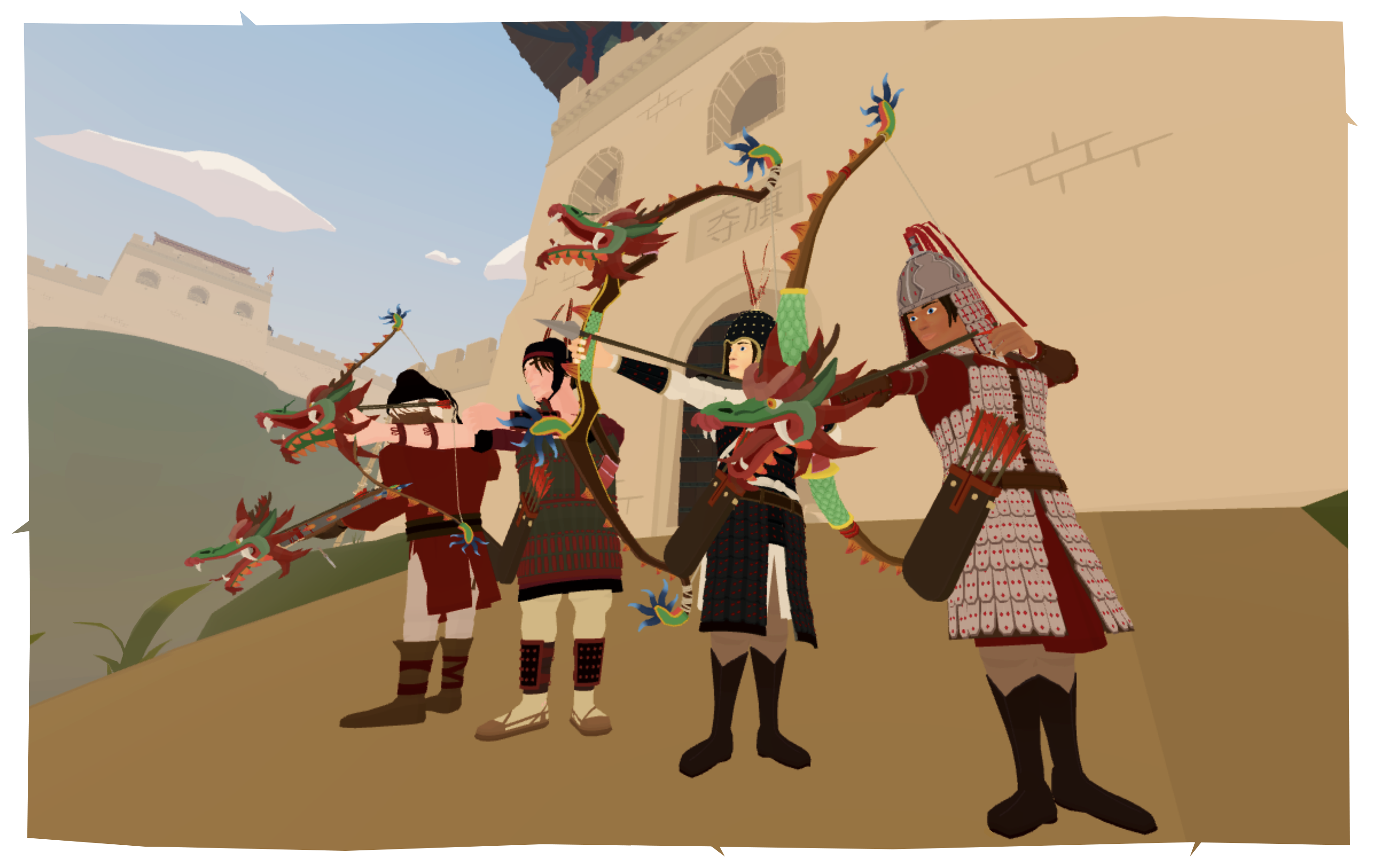 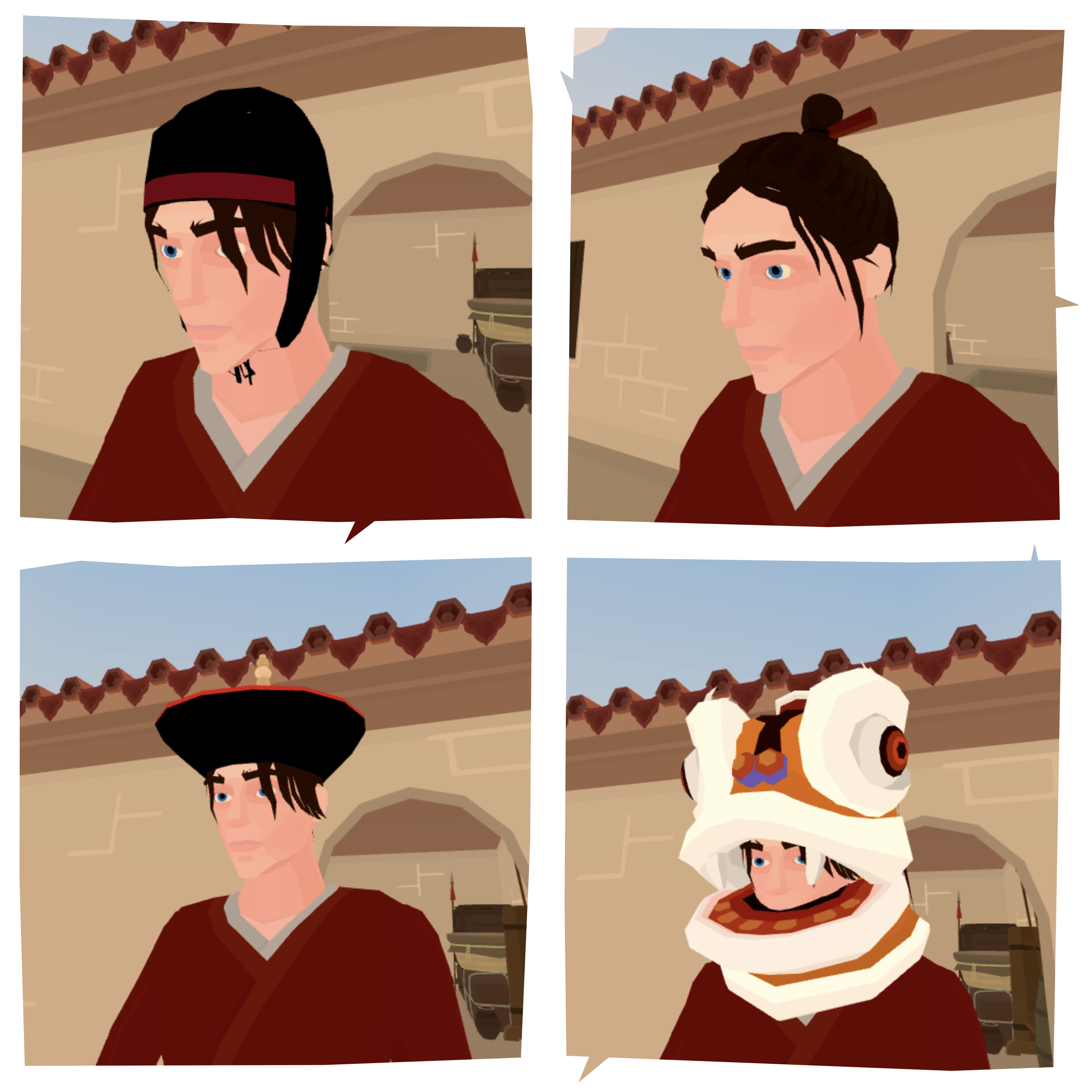 The most requested hat finally makes a return, 🎊 Tiger Hat  🎊 . Originally created for the Chinese new year, but now a permanent item. I promise you, it won't disappear this time.  Rarr 🐯

Because we redid some of the weapon mechanics, the small crossbow no longer requires you to click to reload. Just single clicks for firing. This should make the bow a little better and more comfortable to use.

Someone hooligans broke the wall in the viking map, how rude! 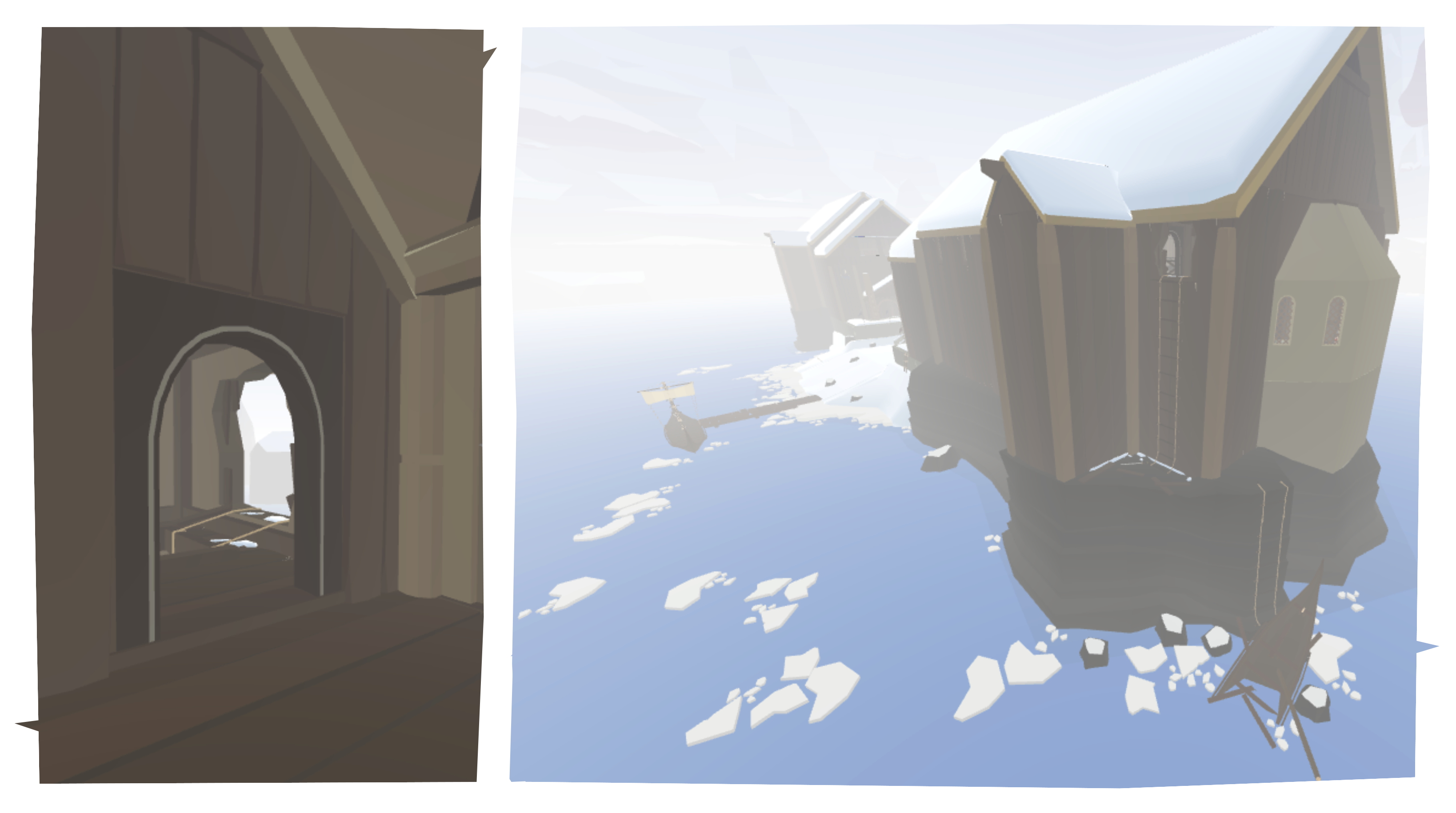 Matches in the viking map seem easy to get stuck, sometimes its too difficult to push through the enemies defense and steal their flag. With the new route you now have a new sneaky way for entering and escaping the building. The route takes some practice because you have to manoeuvre slippery ice chunks.

The fearless gear for the small bow was lacking some coolness, hopefully we got the coolness back to level with the new skin update. 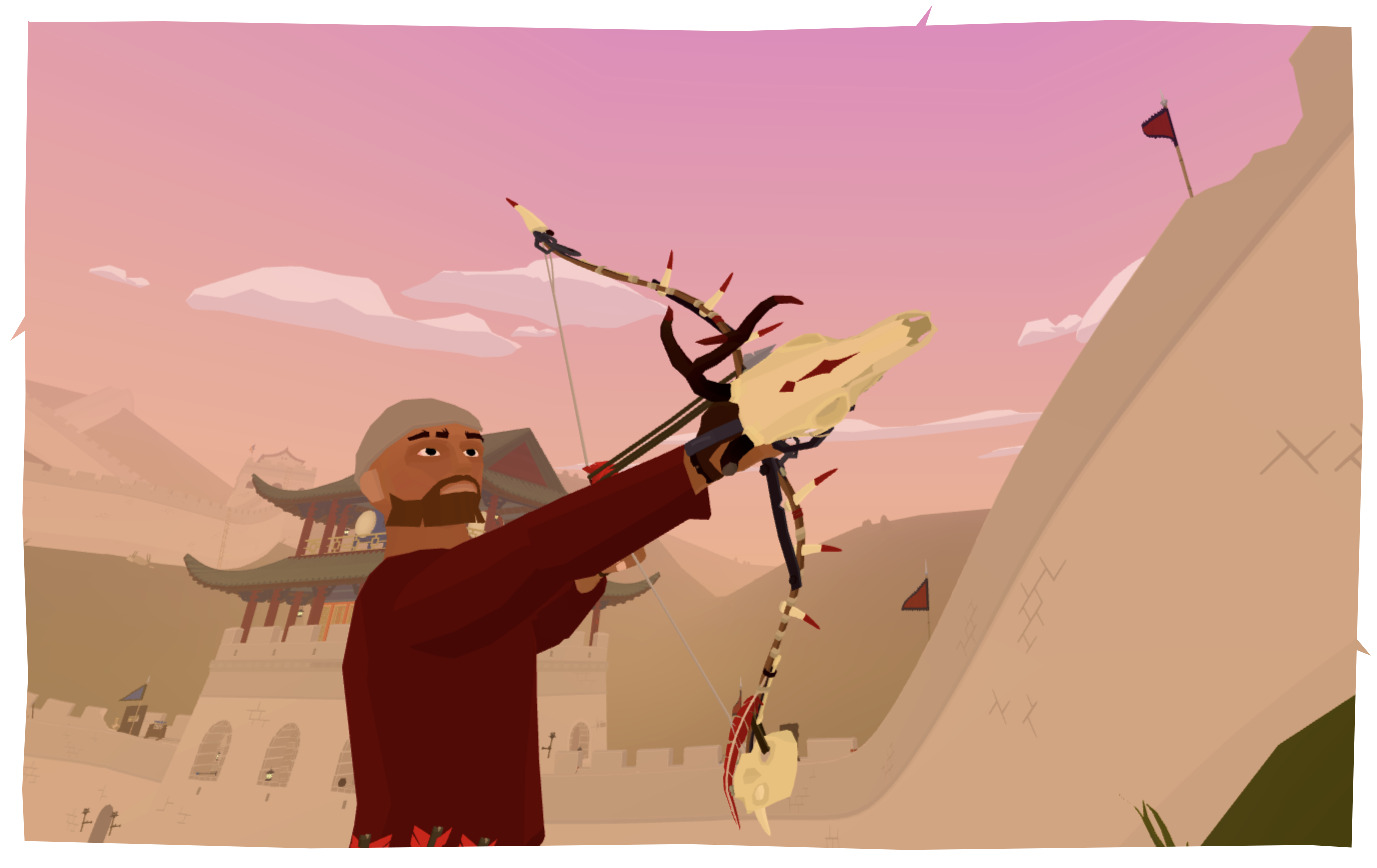 🎉 Alright that's it, thanks for reading.

We're super grateful that you play our weird little arrow game. Also shout out to the community you guys are amazing.

This is such an amazing game, but it really needs one thing. A new gamemode, or even several others. There could be a deathmatch gamemode, for example. Also can you make it so that you cant join a game that already started? That can be annoying sometimes. Aside from those things, this has been my favorite browser game for more than a year :) PS PLEASE never add melee weapons. You described it as a “weird little” arrow game, but wether or not its weird or little, please make it stay an arrow game, because thats what it is in my heart

Hey CKuxixx thanks for playing for over a year! Glad to hear that you enjoy narrow one.

We really want to add new game modes, and we have a lot of ideas for fun ones. But it will take a lot of development time (we are only a 2 person team). Hopefully we get to it one day, it would make matches on all the old maps feel fresh again.

Why are you opposed to melee in narrow one?

If we add melee it will always be as a secondary weapon.

Bows will stay as the main and most effective weapon to use, melee only for lucky close combat moments. You can always walk backwards and keep shooting arrows at the people that try to attack you using melee weapons. I think it could make battles more interesting. We are also planning on adding some breakable stuff (barriers and things) to the game, and it would be nice if it could be smashed with melee weapons.

What do you think?

i don't want game mode wouldn't make n1 unique it's already fullfilled me and i would to have a shield, but i understand it would tip of balance the combat system

I think you are right about melee weapons. I’m glad to hear that you are not planning on making melee weapons something to replace bows, and just almost a kind of thing in your back pocket when the time arises. Good stuff. Also so glad that other gamemodes are already in the mix, really looking forward to that! You truly have created a masterpiece, and im just a little afraid of what has happened to so many good things in the past, where it gets taken in a weird direction and the thing that made it good gets overlapped by all these new things. But carry on, I trust that the future holds only good things :)

More like a masterpiece of a medieval war game.

Perfection has been achieved with this game 👌

Thank you guys for everything you do,

welp, after all its the GREAT wall

This map is the best yet, I got all the new gear! Thank  a lot Fot it :DD

Your surprise is always the best

Wow! I expected more, but since this map is so big...You proabably couldn't do a lot

welp, we got a new weapon sooo

yeah and the weapon idea came from you

the repeating crossbow asa kinda weird behavior, that if you just tap it will only sometimes fire an arrow

this update is awesomee, i‘m gonna try the mini crossbow, mybe i will like it more now and thanks for the shoutout.

keep up the great work

*Until you come up with something new ;)*